Unlike digital pianos or keyboards, MIDI keyboards are not made to function as an acoustic piano. Instead, they are for the more musically creative individual that wishes to twist and pull their sounds into new, unique experiences by using the keyboards array of controllers and features. An MIDI keyboard allows you to edit your performance in real-time without touching the original sound you recorder, which means that every time you want to edit your performance you won’t have to record the sound again.

What Does A MIDI Keyboard Feature?

Bearing in mind that a MIDI keyboard is such a unique tool, you will want one that suits your needs. Some are covered in various different controllers that while may look impressive, actually serve very little purpose. The hunt for the right keyboard for you can be very overwhelming, especially due to their increase in popularity, but there are a few simple functions that your MIDI keyboard has to have.

Is The KeyStep Worth My Money?

While Arturia’s KeyStep keyboard maybe be small, it is a very powerful instrument. Although this keyboard is small, it does feature 32 slim keys which offer you more range and other MIDI keyboards this size. With powerful aftertouch features, you are given more data to edit as you wish.

Not only does this keyboard let you express your creativity, but it also supports it through the use of MIDI and CV. Its multiple outputs allow you to connect all of your audio equipment such as virtual instruments or modular synth set up, meaning you can create new and unique sounds tailored to your taste.

An interactive polyphonic sequencer allows you to enter or erase notes in real-time, giving you to build up complex melodies on the spot without having to edit in a sound studio.

Arturia recognises the importance of interconnectivity with your audio equipment so that you can syn any music you wish as to have everything performing perfectly together. That is why they give you multiple outputs including:

Due to is multiple, reliable functions, this is a piece of kit that sees itself in every major recording studio. A sleek, contemporary design gives the keyboard a luxurious feel while being very affordable. 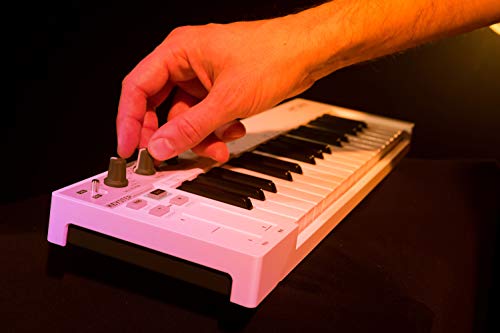 Arturia is a community compromised or dedicated musicians and manufacturers. Seeing as they do not have an established name like Yamaha, they are able to explore and create new experiences, while being unafraid to reinvent their own products.

They combine computer software with traditional music technology to give each instrument a stable yet new feel. They understand that music is a creative industry which is why they have been so successful in their products, so successful in fact that you will see their products in high-end studios being used by major pop-stars. 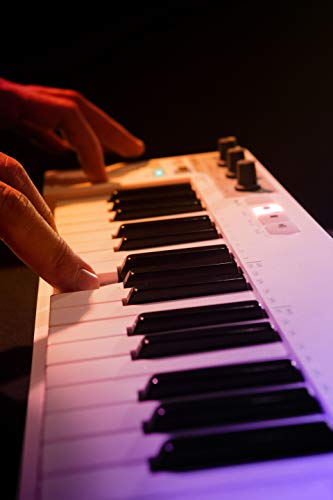 One issue that users found was that the small amount of knobs that were included on the keyboard are not reassignable. This would be fine if the number of controls wasn’t so limited. If you do not use the functions that are provided then there are very few other options. Whereas other slightly more expensive products have an array or reassignable controls.

Should I Buy This MIDI Keyboard?

This MIDI keyboard really does speak for itself. Its array of uses and ability to hook up to any other device that you own makes it a game-changer for any musician. It’s easy to set up which means that anyone can use it and can be creating music in no time. It’s portable and easy to carry size makes it ideal for making music on the go and can act as the perfect MIDI keyboard in any studio.